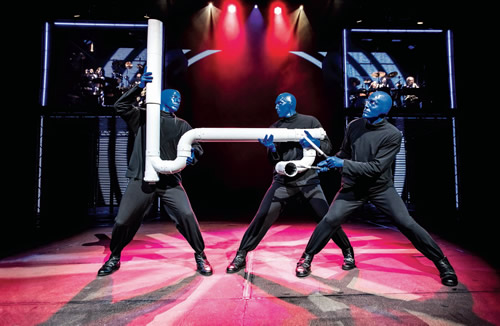 After six successful years on the road, Blue Man Group will circle the United States one more time prior to taking the theatrical tour worldwide. Audiences can catch the wildly popular, award-winning Blue Man Group when they return to the Oklahoma City Civic Center Music Hall for a limited engagement of three performances only, April 29-30. Tickets are on sale now.

“We live in a fast-paced, ever-evolving world. The Blue Man character is a curious being who explores our cultural norms, our every-day objects, but he sees them with fresh eyes and an innocent perspective. As the world around us changes, we are constantly inspired to create new scenarios for the Blue Man to explore,” said Phil Stanton, Co-Founder of Blue Man Group.

“Plus, we really like to keep things fresh and vibrant. For almost 25 years, although the content within the show varies, the mission of every Blue Man Group show has remained the same – to bring the collective audience together with the Blue Men for a euphoric celebration, a heightened state of being alive,” added Co-Founder Chris Wink.

The trademark of every Blue Man Group show is a combination of visually stunning multi-media, multi-sensory performance. The Blue Men are accompanied by a live band whose haunting tribal rhythms help drive the show to its unforgettable climax.

For the founders of Blue Man Group, the universal appeal is based on our shared human DNA. Phil Stanton elaborated, “We say that no matter how high-tech things get, there’s still something human there. We’ll always need others, always need to collaborate. People still need to come together and look each other in the eye. Through the Blue Man’s connection with the audience, we hope to encourage this human-to-human interaction, while helping people reconnect with their own sense of wonder and discovery, with their own sense of what is possible in their lives.”

Presented by Celebrity Attractions, Blue Man Group comes to the Oklahoma City Civic Center Music Hall for three performances only April 29-30. The performance schedule is Friday at 8 p.m. and Saturday at 2 p.m. and 8 p.m. Tickets may be purchased via phone 800.869.1451, 405.297.2264, in person at the Civic Center Box Office, or online at CelebrityAttractions.com. Get social with Celebrity Attractions by becoming a fan on Facebook.com/BwayOKC. Follow them at Twitter.com/BwayOKC or join in the conversation by using #BMGOKC.