Should My Child Go to Pre-K? 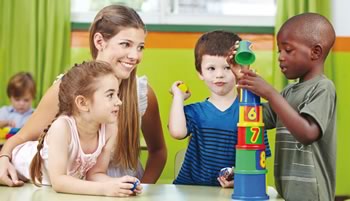 These days, they can’t afford to miss out.

I have a confession.  I never went to kindergarten.

It wasn’t because my parents weren’t ready to send me out into the world. Fifty years ago, kindergarten was in its infancy in this part of Oklahoma and the school serving our farming community didn’t offer it until I was already in first grade.  It didn’t hurt because none of the other 28 first graders in my class went to kindergarten, either.

We were all on a level playing field … well, not really.  My mom was a teacher who had taken a break from the classroom to raise her three kids.  She had taught me how to count to 10, hold a pencil, know the alphabet, spell my name, learn my colors and wield a pair of round-edged scissors – everything kindergarten was designed to do.  I could even color inside the lines. I guess I actually had a leg-up on most of my classmates because of my mom … and maybe Captain Kangaroo deserves a little credit, too.

Back then, kindergarten lasted half the day and was pretty much meant to “housebreak” little ones so that they could behave in a school setting so that the first grade teacher could do her job more effectively.

Turn the clock forward a half a century, and things are far different.  Kindergarten now lasts a full day.  By the end of the year, kindergartners not only know how to read and write complete sentences, they understand nouns, verbs, adjectives and punctuation.  They know how to blend sounds to form words; they’re beginning to tell time, and can recognize values of coins. They know how to add and subtract. They know basic science terms and they can graph.  They have learned the difference between fact and opinion.

Yes, we live in a world of Common Core objectives, high-stakes testing of third graders and producing future engineers.  Children who walk into kindergarten on the first day of school better know their colors, geometric shapes, the alphabet, how to count and how to write their name – or they’re considered behind the curve.

Educational programs for four-year-olds have become the kindergarten of days gone by.  Pre-K is where kids learn to follow rules, pay attention and start developing coping skills they’ll need for the rest of their lives.  They’ll learn self-help skills like tying their shoes, zipping a zipper and opening a milk carton.  They’ll learn how to rhyme and use cadence, which makes it easier to learn to read.  Most of all, Pre-K is where most children start learning how to socialize with others.

Does this mean you have no choice but to send your child to pre-kindergarten?  Absolutely not, but unless you are committed to teaching your child all of those basic skills by the time they reach age five – which is really tough in today’s world where both parents hold down jobs – it’s advisable to send your child to Pre-K.   Fortunately, nearly every community has four-year-old education programs available, whether they’re sponsored privately, through a day care program, or through a school district.  Most programs are already enrolling for the 2014-2015 school year and are open to children who will turn four by September.

Does Pre-K really make a difference?  Ask any kindergarten teacher and they will tell you that they can spot students who didn’t go to Pre-K on the very first day of class.  So the question really isn’t whether your children should go to Pre-K, but how they can they afford not to? •

Keith Mitchell is the Director of Communications and Public Information at Lawton Public Schools.  He is a nationally award-winning education writer.  He and his wife have three sons.