Attack of the Vampire Children 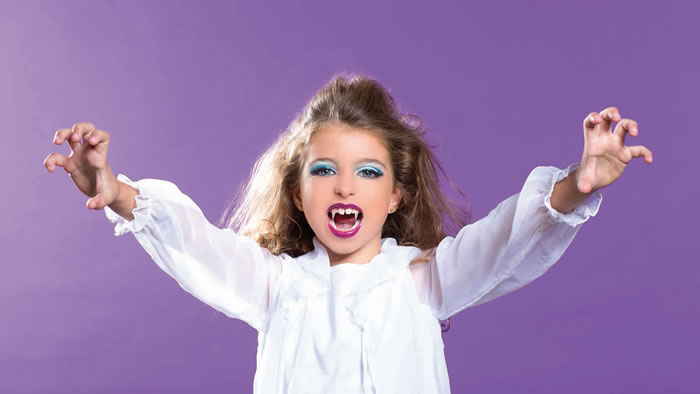 “Dad, can I have $10 so I can go to the Haunted Mill with Justine?” My 12-year-old daughter Wendy had caught me in the kitchen washing a few dishes as evening shadows lengthened outside. “They’ve got people dressed up in scary ways and nooses dangling from the ceiling, and there are creatures who jump out at you and say horrible things.”

“Very funny,” she frowned. “May I have the money, please?” Each October the old grist mill in the next town is decorated for Halloween and staffed with monsters to raise money for charity. I dried my hands, dug out a 10 and handed it over.

My 15-year-old daughter Sally was at the kitchen table reading a school book. Her nostrils flared at the scent of money changing hands. As Wendy went to phone Justine, Sally looked up and said, “Dad, I need $15. The marching band is getting new plumes for our hats.”

“Anything for education,” I said and gave her the money. Whenever one of the kids puts the bite on me, it sets off a feeding frenzy. But this one had subsided quickly, both my little vampires having sucked out what they needed.

In the ensuing calm, I reached for a Brillo pad, not noticing the paring knife that had been put in the draining rack with its point sticking up. It jabbed my hand; a small but painful puncture. “Nice try,” I muttered grimly. Oh, did I mention that my kids are trying to kill me?

No, I’m not imagining it. They’ll place a full backpack right in the middle of a household traffic path. The cellar stairs, which are dark and usually navigated by me while carrying a basket full of laundry, are the place to put cans of spray paint, glue guns and wet towels, all of which make for treacherous footing. They’ll light candles in their rooms on the off-chance they will burn the house down. They’ll hide sewing needles in upholstery. They’ll leave mayonnaise out on the counter to breed deadly bacteria.

My wife says the kids are just unthinking, uncaring, lazy and slovenly. But she’s ALWAYS sticking up for them. I love my children, too, but I think it’s a deliberate campaign.

I washed a few pans and knives before I turned back toward Sally and jumped as a hulking figure lurched out of the shadows. I may have cried out. The brute grunted a greeting and I recognized Joe, the ex-boyfriend of my oldest daughter Marie. Six-foot-two and fleshy, dressed in black rags with a pierced lip and dyed-black hair, he’d be a shocking sight even if you could watch him coming from a mile away in broad daylight.

My heart was still pounding as Sally brandished a CD, saying, “Joe stopped by to leave this for Marie.” On its label were guys who looked like Joe. “It’s a new one by ‘Miscreant,’” she added.

Marie is away at college, at that moment probably searching the campus for the right young man to bring home for Thanksgiving. If she finds a creep who is creepy enough, her dad just might have a heart attack. Joe seemed to sense Marie’s quest. Always sullen and loutish, tonight these qualities were tinged with melancholy.

Gesturing toward the CD, I said, “How thoughtful.” Then, wishing Joe didn’t know where we sleep, I went up to my room. I removed a pair of wicked-looking scissors from my bed and lay down and stared at the ceiling for 20 minutes.

I heard a couple of thumps and some muffled cursing. Then my wife came into the room and lay down beside me. She had the blanched look of someone who’d just stepped on a slippery issue of Seventeen magazine and nearly fallen down the stairs. We both stared at the ceiling as if no one had bothered to close our eyes.

My wife said, “Sally asked if we’d take her and some of her friends to the Haunted Mill tonight.”

“The place where the walls drip blood and scary people wear horrible outfits and demand money?” I asked.