The Roots of Love 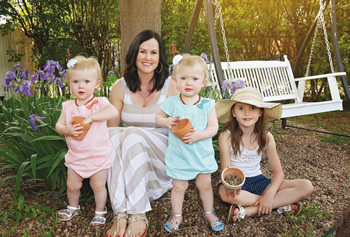 After a heartbreaking miscarriage, Haylee Root and her husband, Steven, were thrilled when she gave birth to their daughter, Breckyn. Over the next several years, life settled into a steady routine, and it seemed that they were not going to be blessed with more children, which they all wanted. Then, in May of 2013, they discovered they were expecting again – this time with twins!

In 2013, my husband, Steven, and I planned a vacation for June to Beverly Hills and Las Vegas to celebrate our 10-year anniversary. Our daughter, Breckyn, was old enough to leave for an extended period with family, so we felt comfortable taking a trip. We went to see our family doctor, James McGouran, M.D., in Duncan, Oklahoma, just before our trip, and he confirmed a heartbeat and determined I was about 7 weeks pregnant. I felt great and it was a very relaxing and fun time for us.

By August, I had been growing quickly and began feeling really sluggish and tired. On any given day I would feel really ill, depending on my dietary choices. It reminded me of when I had been pregnant with Breckyn and had developed gestational diabetes. That normally doesn't develop until the third- trimester, though, so I was concerned since I was only three months along.

Since Dr. McGouran was out of town on vacation, I made an appointment with my OB/GYN, Stacie Elfrink, M.D. She performed an ultrasound to verify a heartbeat. Within a few seconds she exclaimed, "You are having twins!"

What a shock! She set an appointment for me to visit the OU Prenatal Diagnostic Center to get another ultrasound. She said I would have to see them at least every two weeks to make sure there were no complications, as my pregnancy was now considered "high- risk."

At my first appointment at OU, they determined that we were having identical twin girls. I was very excited at this news, as the best possible combination I could think of for twins would be just that! I continued to go to OU every two weeks for these specialized ultrasounds. It was important to closely monitor the babies' growth since they shared a placenta and to make sure they did not develop twin-to-twin transfusion syndrome, a condition where one twin receives all of the blood and nutrients from the other. Each appointment went well; both babies weighed within a few ounces of the other and measured very similarly.

My last appointment there was on Friday, December 13, 2013. Once again, we received a great report with both babies being very close in all measurements – meaning no fear of twin- to-twin transfusion syndrome. During the month of December, I also began going to the Birth Center at Duncan Regional Hospital (DRH) two times a week to have a non-stress test completed. This was simply a precautionary measure to make sure that all of our vitals were in normal range.

On Monday, December 16, my routine non-stress test visit showed my blood pressure to be elevated, and I was very swollen – a sign of pre-eclampsia. My doctor decided to keep me overnight to monitor me, and said she wanted to check the protein in my urine to determine if I had pre-eclampsia or not. This was a 24-hour test, so it would not be completed until noon the next day. She said the normal range was about 300mg. When my results came back the next day, my level was extremely elevated, at 3,800mg!

They made a very quick decision to deliver the babies first thing Wednesday morning, December 18. I was put on a Magnesium drip at this time also, that I would stay on until the babies were delivered. It made me feel horrible, but I didn't really care. I already felt so bad; it was just a different form of feeling bad. Little did we know that the diagnosis of pre-eclampsia, and everything that it caused me to go through, was the least of our worries. If it were not for this extreme elevation of protein, and the insight of my doctors to deliver the girls early, I am convinced we would not have these two sweet babies to share a story about. 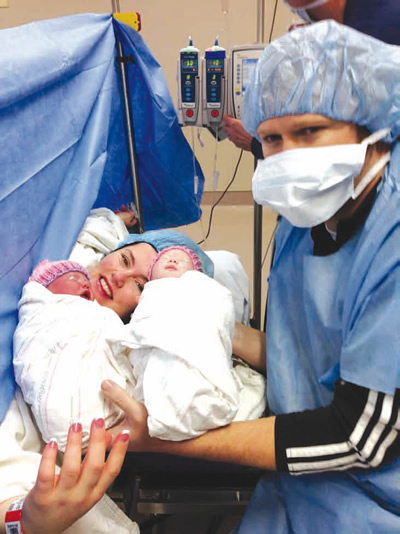 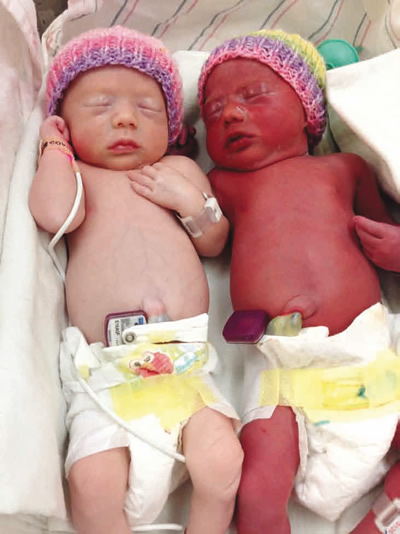 Needless to say, this is very serious, and my girls needed treatment immediately.

I was unaware of the severity of the situation, however. I can imagine everyone needed me to stay as calm as possible (having just gone through major surgery). They came to tell me that the girls needed to be transferred to OU Children's Hospital, but I would have to stay at Duncan Regional Hospital until I was discharged by my doctor. They even suggested that once they got there and were evaluated, they could possibly send one or both babies back to be with me.

Finally, I heard the helicopter land. I said my goodbyes and my babies were whisked away. Steven left right behind them. I was left to wonder and worry.

Steven called and sent me text messages regularly, but in hindsight I now realize that he was purposefully giving me very limited information. The first thing he shared with me was that they needed to flush all of the blood from Whitnee and give her all new blood, and that they needed to give Everlee all new blood to replenish her depleted supply. He sent me pictures, and my precious babies had tubes everywhere, but he assured me they were doing great and that they were being well taken care of. He encouraged me to get rest and reminded me that I would be able to see them very soon.

I stayed at DRH for two nights and was released on Friday, December 20. I had no complications and was recovering as expected. My mom, Breckyn, and I immediately went to Oklahoma City where I finally got to hold my babies. This was the first time they had been held since they were born. Thankfully, the twins continued to improve, and they were finally released from the hospital.

During all of this, my faith and my family were my foundation. Our daughter, Breckyn, is a wonderful and helpful big sister. As for my husband, Steven – how can I explain how wonderful he has been? My girls have the best dad on earth.

We never know what direction our lives will take us. When the path is rockiest, that's when it's important to have hope. Friends and family will be with you during the good times, but it's during the difficult times that you realize how much they are willing to help you carry that burden. Steven and I owe so much to the healthcare providers who genuinely cared for us during this journey and continue to do so. Their efforts brought us twice the breathtaking joy.

Haylee Root is the Director of Marketing at Duncan Regional Hospital in Duncan, Oklahoma. She and her husband, Steven, have been married for 11 years. They have blogged about their family's inspirational journey. Read Haylee's blog at rootswithlove.com/the-root-twins-birth-story-part-i,  and Steven's journal at rootswithlove.com/the-root-twins-birth-story-part-ii. Photos this page courtesy of the Root family.